It all about a letter from Guru Gobind Singh Ji to Aurangzeb after leaving Kachhi Gadi of Chamkour. Guru Ji wrote this letter in Deena Kangad and send it to Aurangzeb.

In this letter, Guru Gobind Singh Ji reminds Aurangzeb how he and his henchmen had broken their oaths sworn upon the Qur’an. He also states that in spite of his several sufferings, he had won a moral victory over the Emperor who had broken all his vows. Despite sending a huge army to capture or kill the Guru Ji, the Mughal forces did not succeed in their mission.

In the 111 verses of this notice, Guru Gobind Singh Ji rebukes Aurangzeb for his weaknesses as a human being and for excesses as a leader. Guru Gobind Singh also confirms his confidence and his unflinching faith in the Almighty even after suffering extreme personal loss of his Father, Mother, and all four of his sons to Aurangzeb’s tyranny.

If you like to read Gurbani. Gurbani Quotes is only a way to see Gurbani Arth of Sri Guru Granth Sahib Ji. In this Image, As you can see, the meaning of Gurbani is written in a single line. Which you can see anytime and anywhere after downloading it. It’s in HD quality.

We also Provide that. Click on these links and know more about Sikhism. 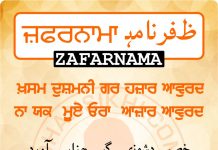 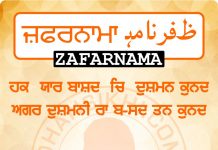 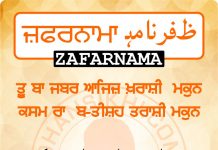 For Latest Punjabi Videos, News and Much More Visit www.shaukeenpunjabi.com

© all rights reserved by ARSHHUB