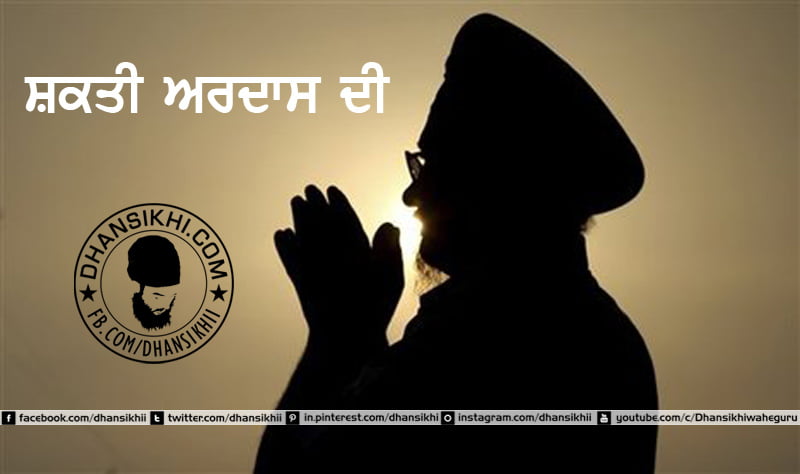 Once in the darbaar of Guru Gobind Singh jee, a Sikh called Laal Singh came with a shield. He had spent a lot of time constructing this shield which was almost impossible to penetrate. It was not only strong but was also very light. Everyone in the darbaar praised the dhaal (shield) and Guru Sahib too expressed his happiness at the dhaal.

Bhai Laal Singh was a very good Sikh but when so many people praised his dhaal, he developed haume (ego) and declared in the sangat that no bullet can penetrate his shield. He said this very egoistically. As soon as he said this Guru Sahib told him that he would test Laal Singh’s dhaal the next day. Bhai Laal Singh still did not realize his mistake and accepted the challenge saying that no bullet could penetrate his shield.As he came out of the darbaar of Guru Sahib, he realized that he had committed a blunder. He said to himself that Guru Sahib is a known warrior and on top of that he is Satguru. What could stop him from penetrating his shield? He greatly regretted his mistake and came to his lodging area greatly depressed. Although, he realized his mistake of challenging the sangat, he still wanted Guru Sahib to keep his honour and not let anyone break his shield.

He consulted his friends who were gursikhs as well and asked them what to do. They told him that Guru Sahib could no doubt penetrate his shield. They suggested to him that the only way for him to save his honour was to perform Ardaas in front of Guru Sahib. Bhai Laal Singh prepared “Degh”(Karaah Parshaad) and along with other Gursikhs did Ardaas before Waheguru to save his honour. Bhai Laal Singh did not sleep all night and kept doing paath all night. The next day Bhai Laal Singh arrived in the darbaar of Guru Kalgidhar Paatshaah but he arrived very humbly. After the bhog of Kirtan, Guru Sahib asked Bhai Laal Singh to get ready as he was going to test his dhaal. Bhai Laal Singh did not accept the challenge as he had done the previous day but responded very humbly to Guru Sahib.Guru Sahib asked Bhai Aalam Singh to test the dhal first. Bhai Laal Singh stood there with the dhaal, constantly doing naam and paath. Bhai Aalam Singh tried three times but the bullet missed the dhaal and did not hit it.

CONCLUSION
1) So great is our Guru. Guru Sahib himself accepted the defeat by not penetrating the dhaal but protected the honour of his Sikh. Why should we leave such great Guru and get indulged in maaiya? Aseen kurbaan kyoon nahi ho jaande apne Guru uppar?
2) It is a good idea to prepare degh with full maryada and perform ardaas for our difficult kaarajs. Nothing is impossible if we do ardaas with full faith.
3) Never talk egoistically in Sangat.
4) Guru does not consider our shortcomings and weaknesses when we do ardaas. He ignores our shortcomings and accepts ardaas that is done with faith.