This is an amazing sakhi about Satguru Sri Guru Har Rai Sahib Ji, the King of Kings and the Saint of Saints and his beloved sikh, Bhai Gonda.

A devout Sikh called Bhai Gonda abode with Satguru Sri Guru Har Rai Sahib Ji Maharaj. He was a saint in thought, word and deed. Guru Ji was very much pleased with his sincere devotion and said, ‘Bhai Gonda, go to Kabul, instruct Sikhs over there in the worship of the true name and preach the faith of Guru Nanak Dev Ji. Feed holy men and pilgrims with the offerings that you recieve, and send what remains for the maintenance of my kitchen. These are your duties, and I am confident that you will perform them’.

Although Kabul was a foreign country and there was danger from Muslim bigotry in residing there, yet Gonda cheerfully accepted the task which was given to him by his beloved Guru. On arriving in Kabul he built a Gurudwara, and carried out all Guru Jis instructions. In other respects the following lines of Sri Guru Arjan Dev Ji Maharaj which he was accustomed to repeat, served him as a guide:

Meditate in your heart on the Guru’s image;
Regale your mind with the Guru’s word and spell,
Put the Guru’s feet into your heart,
And ever bow to the Guru, the Supreme Being.

One day while Bhai Gonda was repeating Japji Sahib, he thought he was clinging onto Guru Jis feet. He was in such a state of abstraction that he became quite unconscious. He grew as absorbed in the sight of Guru Ji as a drop of rain in the ocean.

All knowing Guru Ji, knew what was passing in Gonda’s mind, and sat firmly on his throne keeping his feet together. When dinner was annouced, as usual at mid-day, he made no response. When the annoucement was repeated about an hour afterwards, he still remained silent. A third time after a longer interval dinner was annouced and the sevadaars asked permission to serve it, however, still Guru Ji did not speak.

When several sikhs were on the point of making a representation to him, he broke his silence and said, ‘My Brothers and Sisters, Bhai Gonda is in Kabul. He is in thought, word and deed, a sikh of the Guru. Today he has clasped my feet. How can I withdraw them from him? And how can I go and take my dinner until he lets go of my feet? I am therefore waiting until the conclusion of his meditation and obeisance.’

Bhai Gonda did not awake from his trance, before twilight, and it was only then that Guru Ji felt free to take his repast. 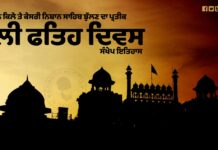 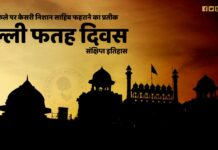