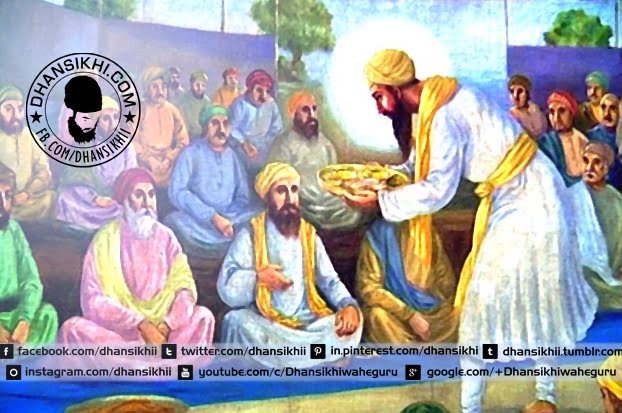 It was during the time of Guru Arjan Dev Jee. Sangat was coming from Kabul (Afghanistan) to Amritsar for darshan of Gurujee. They met a Sikh and his wife on their way. This Sikh did a lot of sewa of the sangat. He massaged their legs, waved fan over them as they rested, brought water for them, everything. The next day they proceeded with this Sikh to Amritsar. As they reached Darbar Sahib, the jathedar of that Kabul sangat asked a few boys to take care of the shoes of everyone. None of the boys was ready to do it, as they all were very much eager to be the first ones to have darshan of Gurujee. At last this Sikh came forward and said I shall do it.

The sangat went inside and waited for 30-45 minutes, but Gurujee didn’t show up. Then the jathedar went ahead and asked Baba Buddha Jee where Gurujee was.

Babajee : Gurujee has gone to see the sangat coming from Kabul.

Jathedar : But we are the sangat from Kabul!

Jathedar : No Babajee, we didn’t. But we met a Sikh and his wife and they did a lot of sewa.

Babajee : Where is that Sikh now?

Jathedar : We left him to look after the shoes of the sangat.

It was none other than Guru Arjan Dev Jee Himself