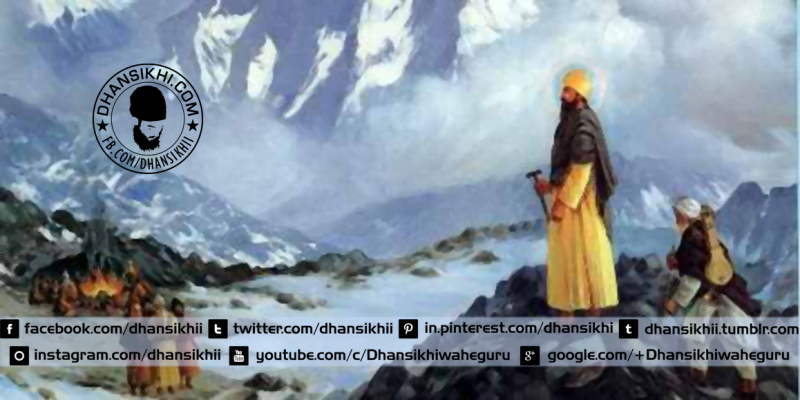 Sidhi Sadhus are a sect of ascetics. They generally live on high mountains. They believe that salvation can be sought by torturing the body.

Guru Nanak Dev was a constant traveller. After covering far flung areas in the plains of India he went to important places in the Himalayan hills. While travelling in the hills, the Guru met a group of ascetics led by Gorakh Nath. They were in the first instance surprised to see the Guru at an altitude of 6000 meters. They wanted to humble him in a debate on philosophy of life. This they could not do ( i.e. they failed). Guru Nanak had better arguments. Some of the questions and answers from the discussions that took place are as follows…

Nanak: What is the use of wandering around? Purity comes only through Truth.

Nanak: He (God) dwells deep within the nucleus of each and every heart. This is my seat and my
home. I walk in harmony with the Will of the True Guru. I came from the Celestial Lord God; I go
wherever He orders me to go. I am Nanak, forever under the Command of His Will.

Sidhas: The world-ocean is treacherous and impassable; how can one cross over?

Nanak: As does the lotus flower floats untouched upon the surface of the water, with one’s
consciousness focused on the Word of the Shabad, one crosses over the terrifying world-ocean. O
Nanak, chant the Naam, the Name of the Lord and enshrine the one Lord in your heart.

Sidhas: “Where did we come from? Where are we going? Where will we be absorbed?

Nanak: By His Command we come, and by His Command we go; by His Command, we merge in
absorption. Through the Word of the Shabad, the state of dignity is attained. We emerge from Truth,
and merge into Truth again. The pure being merges into the One True Lord.

Sidhas: “What can you tell us about the beginning? In what home did the absolute dwell then?

Nanak: We can only express a sense of wonder about the beginning. The absolute abided endlessly
deep within Himself then.

Sidhas: Who is your guru? Whose disciple are you?
Nanak: The Shabad (Word) is the Guru, upon whom I lovingly focus my consciousness; I am the
‘chaylaa’, the disciple (of Shabad-Guru). O Nanak, throughout the ages, the Lord of the World is my
Guru.

Sidhas: What is that meditation, which leads the mind to be absorbed in itself?”||45||

Nanak: Eradicating egotism and individualism from within, and erasing duality, the mortal becomes
one with God.

Sidhas : “What is that wisdom, by which one remains steady and stable? What food brings
satisfaction?”

The stories of one’s ancestors make the children good children. They accept what is pleasing to the Will of
the True Guru, and act accordingly. ( Guru Granth Sahib Ji – 951)

Nanak: Drinking in the Ambrosial Nectar (Nectar of Shabad – Word), the soul settles in peace.
Hunger for the True Lord shall consume your pain, and through the True Lord, you shall be satisfied.

Ultimately they decided to impress him by the power of their miracles. They gave the Guru an empty bowl and asked him to fill it with water from the nearby tank. The Guru went there but came back empty-handed. He was not distracted by diamonds and pearls which were lying there. The Guru said: “Sorry! There is no water there.” They were ashamed to hear the Guru say: “I had gone there looking for water. I had nothing to do with diamonds”. They became his disciples.