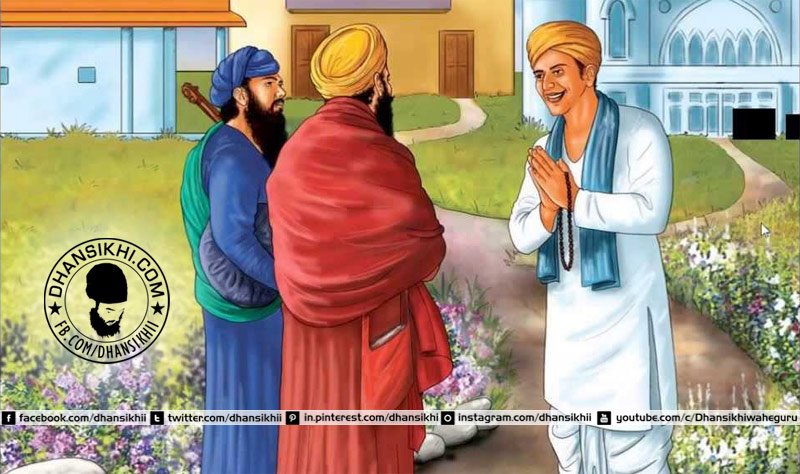 Sajjan means a nice person, a friend, a helper. There was a man with this name living in Tulamba (now in Pakistan). He was known as a good man in his area. He had constructed an inn for travelers to rest for the night.

Whenever a traveler would forget anything in the inn, Sajjan kept it as his own. Slowly he developed the bad habit of stealing valuables of the travelers when they were sleeping at night. After some time, this bad habit made him a wicked man. He even killed people staying at his inn if he wanted to take away the travelers’ belongings. A “sajjan” because of his bad habits thus became a “thug.” The people, therefore, called him “Sajjan Thug.”

On one of their journeys Guru Nanak Dev ji and Bhai Mardana ji stayed at Sajjan Thug’s Inn for the night. In the evening When Sajjan Thug was to rob the visitors( Guru ji), Guru Nanak Dev ji started singing a shabad while Bhai Mardana played on the rebab. The shabad explained that if a person is bad at heart, an outward show of good acts means nothing. God knows our mind and no one can bluff Him . The true friends (sajjan) are actually the good deeds of a man. These good deeds help the man not only here in this world but also after death in the next life. By evil acts man makes his mind dirty, because of which he not only suffers here in this world, but also his soul remains dirty even after death.

Sajjan Thug had been listening to this shabad attentively. As the shabad went into his ears, his mind started “seeing” the truth. He realized he was an evil man. He was taking away the belongings of innocent travelers and doin harm to whom he was supposed to provide comfort and service.

Sajjan Thug went to the Guru, folded his hands and confessed before the Guru that he was Sajjan only by name. Actually, by his deeds he was a Thug. Sajjan Thug sincerely repented and promised to lead a holy life in the future.

The Guru was pleased by the change of his heart and he was very kind to Sajjan Thug.Sajjan was advised to distribute all the ill-got money to the needy and start his life afresh as an honest man. He sincerely practiced as the Guru advised him. He started helping the visitors and making their stay comfortable by whatever he could do for them.
Thus, a Sajjan by name, became a Sajjan by his deeds as well, after meeting Guru Nanak.