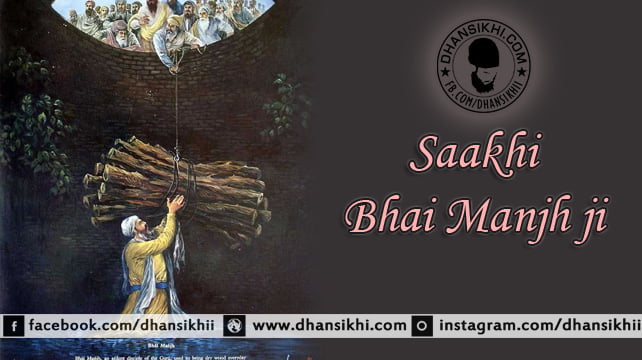 In the time of Guru Arjan Dev jee, there was a powerful and rich man by the name of Teeratha. Teeratha was a follower of the Muslim sect of Sakhee Sarvar(who use to worship Pirkhana [tomb]) . He was the local leader of this sect and had hundreds of followers who all respected him. Teeratha would regularly lead the members of this sect on a pilgrimage to the main Sakhee Sarvar shrine (now in Pakistan).

Once he saw a large number of turbaned people, who were doing service with great zeal. He noted that they were reciting some Shabad (hymns), along with doing sewa (service), in a very melodious tone. When he went further, he saw the Langer (food) being cooked and served to everybody irrespective of any distinction. The devotion and enthusiasm of the people impressed Bhai Manjh, who felt a pull of love strings in his heart. He felt instant peace, solace and equipoise on listening to the divine hymns being sung there. The holy congregation was in the presence of the Guru Sahib himself. The congregation enjoyed all this with great emotional bliss. When the evening session ended, some of the people, who had come for the first time, sat down to have a dialogue and listen to Guru Sahib’s sermons.

Bhai Manjh also sat down and after a while introduced himself and begged Guruji for Naam-Dhan. Guru jee explained to him that “Being a Sikh is no easy thing. The path is finer than a hair and sharper than the khanda. The primary
principle of Sikhee is humility”. After Teeratha’s repeated request Guru Arjan Dev jee accepted his request and initiated him into Sikhee and gave him Naam.

Teeratha took leave of his followers and decided to stay with the Guru for some time. The Sikhs knew that Teeratha was from the Manjh clan and began to call him Bhai Manjh.

Bhai Manjh began to take the seva of bringing woods for the langar, cleaning the dishes, serving the visiting sangat and any other seva he could find. The Guru too heard of Bhai Manjh’s sevaa and one day called Bhai Manjh to come see him.

Bhai Manjh ji appeared before the Guru and bowed. Guru Arjan asked, “Bhai Manjh, where do you eat?” Bhai Manjh
replied, “Satguru, I eat from your langar…”

Guru Arjan jee then said, “well then, what you do is nothing but wage-labour isn’t it?”

The sangat was stunned. They knew Bhai Manjh had sacrificed his entire wealth and prestige to become a Sikh and now did more seva than anyone else in the Darbaar. How could Guru jee have humiliated him like this in front of everyone?
After all, the Langar was open to everyone, why would Guru jee say such a thing ?
Bhai Manjh was once a powerful and proud aristocrat with hundreds of followers. He now hung his head and then said,
“Satguru, you are wise. Please give me the wisdom to understand and accept your Hukam.”

Bhai Manjh now decided to no longer eat in the langar. He decided to collect two bundles of wood from now on and he would give one to the langar and sell the other to earn his living and use it to purchase his food. Bhai Manjh’s daughter asked her father why the Guru was so merciless to him. Bhai Manjh immediately replied, “No no! The Guru is merciful. He is testing our faith. We can not fail.”

Bhai Manjh would rise early and begin to collect wood for seva and also to sell. After giving the first bundle and selling the second, he would return to the Darbaar and do seva all day. He would put all his extra money into the Golak.

Once, due to inclement weather, Manjh ji couldn’t see the road clearly and fell down in a shallow unused well. Fortunately, the well was not very deep and there was not much water in it. Bhai Manjh stood up in the well and kept the bundle of firewood on his head so that the dry firewood might not get wet and can still be used for the Langar. When Bhai Manhj ji did not return with the woods for the langar, everybody started looking for him and found him in the well.

On hearing that Bhai Manhj ji had fallen in the well, Guru rushed to the well with necessary equipment. When the ropes were lowered, Bhai Manjh requested the Guru to draw out the fuel wood first, as he considered dry wood more essential than himself. It was done, and when Bhai Manjh was drawn out, the Guru embraced him in his wet clothes blessing him and said “Bhai Manjh! You have passed the test of Sikhi (Sikh way of life) very well, your sevaa has borne fruit. Ask for anything you want.”

Bhai Manjh replied, “Guru jee, bless me that I may always be content and May my consciousness remain at your feet and may I never forget the meditation of your Naam.”

Guru Arjan heard these words and then said,

Guru Sahib meant that those who are as devoted and do service to the Sikhi the way Bhai Manjh has done and lead the life as laid down by Gurbani, (they) will be liberated from ego and vanity. As vanity is the root cause of sufferings and miseries in this world, by being relieved from ego and vanity, the person will receive all the pleasures and grace from God.