Submission to the Will of God (WAHEGURU)
Guru Nanak Dev ji gave the message of “Hukam Rajayee Chalna Nanak Likheya Naal“. Guru Nanak Dev ji says that everything happens by God’s Grace, so Rest assured that God knows better what is right or wrong for us. We should, therefore, accept His decisions without any grudge or question.

There is One God
Guru Nanak Dev ji said, “I am neither Hindu Nor Muslim, I am a follower of God”, which actually spoke about his belief in one god. In Sikhism, the god is omnipresent, shapeless, timeless, and sightless. ( Nirankar, akar, alakh). Sikhism stresses that before creation there was God, and because of His will ( Hukam), the Illusion ( Maya of attachment and enticement) came into being. The God in Sikhism is not male/female, and can only be seen through the inward eye. Guru Nanak Dev ji explained one thing clearly that there is only One who gives to Everyone and we should not forget to Him. The Guru stressed that full knowledge of God is impossible in human form.

Goodwill for all – SARBAT DAA BHALAA
Guru Nanak dev ji passed the message of Universal brotherhood. He said that religion is not mere consistency of words but actually looks at all men and women equally. Universal brotherhood is a strong theme in Gurbani written by Guru Nanak Dev ji. In our prayer, we say this line towards the end of daily Ardaas – “Nanak Naam Chardi Kala Tere Bhane Sarbat da bhala”, which can be translated as “Nanak asks for ‘Naam’ (name of God) with which comes well being, happiness and positive spirit and with your blessings.”

SACH SUNAISI SACH KEE BELA – (to speak the truth)
Guru Nanak Dev Ji told in front of King Babar “You are not Babar but JABAR“. We should always speak the truth without any fear. According to Guru’s doctrine, the victory of truth is not dependent on ending or suppressing falsehood but in standing firmly by truth. That is why Guru Nanak Dev ji exhorts that to stick to the truth and to remain on the side of truth when it is necessary is very essential –
SACH KI BANI NANAK AAKHAI SACH SUNAISI SACH KI BELA
I HAVE RELATED THE TRUE WORD OF THE TRUE LORD AS PER HIS WILL.

SEWA AND SIMRAN
Guru Nanak says that no one can save anybody else. It is only Guru who guides us to safety and to be saved, one has to follow the right path of SEWA and SIMRAN told by him. Further, the Guru is not to be found in big palaces, he lives with the poor. Let us love the poor, God will bless us. If we recite Gurbani with love, we will find the Guru is speaking to us. We have been reminded of his observations many times in our life. When we barely make both ends meet, we are usually sincerely devoted to GURBANI and the Sikh way of life. But when we have excess money to spend on worldly pleasures we follow vices and ignore the real mission of human life. DHARAM is usually the first casualty when we become rich. About SEWA Gurbani explains: (In the midst of this world, do SEWA and you shall be given a place of honor in the Court of the Lord)

The three Principals
Vand Chako: Sharing with others, helping those with less who are in need
Kirat Karo: Earning/making a living honestly, without exploitation or fraud
Naam Japna: Chanting the Holy Name and thus remembering God at all times (ceaseless devotion to God)

Shun five Evils
Guru Nanak Dev Ji asked his followers to shun five evils that lead to illusion (Maya) which eventually acts as a roadblock towards the attainment of salvation. The five evils are – Ego, Anger, Greed, Attachment, and Lust.

Importance of Guru
Guru Nanak Dev ji lays great emphasis on having the importance of Guru in one’s life. He put forward the thought that salvation occurs not from pilgrimage or rites etc, but through heart, spirit, and soul. For this to happen continuous seeking of knowledge must take place which is dependent on one’s guru. Guru according to him is the voice of the god, the true source of knowledge and salvation.

No Discrimination
Guru Nanak Dev ji was strongly against all artificially created divisions and all discrimination, both in word and deed. He said that the caste of a person is based on what he does. His idea of a caste-free society transpired also in his concepts of Sangat and Pangat.

Against Rituals/Superstitions
Guru Nanak Dev Ji preached against superstitions, false rituals, worship of demi-gods and goddesses. He stressed that only One God, the Formless, is to be glorified. In this way, he showed the path of truth and enlightenment. 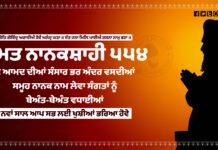