Guru Har Krishan Ji was known as the child Guru since he became the 8th Guru King at the age of 5. This was unacceptable to a lot of people, who questioned Guru Ji’s suitability as leader of the Sikh nation. However an incident of a proud Brahmin at Panjokhora put Guru Ji’s critics at ease. The Hindu priest was very proud of his education, he knew a lot about the Hindu religious scriptures called the Gita, he requested that ;

“My Lord Krishan uttered the words of the Holy Gita. You too have Krishan in your name, if you can explain the meanings to me, I will become your devoted Sikh.”

Guru Ji realised that it would take something special to destroy the Brahmin’s ego and stated any passer-by could answer his queries. The clever Brahmin chose a deaf and dumb mute who he thought had no chance, however Guru Har Krishan Ji blessed the deaf mute who bowed before Guru Ji and began to recite interpretations of the Gita. Guru Ji stated :

“The eyes of understanding are very good, but the cataract of pride so blinds them, that they cannot see God’s path.”

The Brahmin realised, that although young in age the Guru had divine wisdom, he apologised to Guru Ji and fell at his feet asking to accept him as a disciple.

Guru Ji’s elder brother Ram Rai complained to Emperor Aurangzeb about his brother’s succession and requested that he intervene. Aurangzeb realised that the Guru would not visit him in person and requested Raja Jai Singh to plead Guru Ji to visit the Sikhs of Delhi. Guru Har Krishan Ji agreed but made it clear he would not visit Aurangzeb, thus he stayed at one of the bungalows (bangla) of Raja Jai Singh as a royal guest. Guru Ji’s divine presence turned the mere bungalow into a place of worship, there is a beautiful Gurdwara there to commemorate Guru Ji’s stay in Delhi called Gurdwara Bangla Sahib.

In 1664 Delhi was ravaged by a smallpox epidemic, Guru Har Krishan Ji dipped his toe into the water a Bangla Sahib and blessed the water which was used to treat the sick people. He served the sick with food and medicine. The Sikhs collected corpses from different parts of the city and disposed of them with dignity. Guru Ji himself fell sick with smallpox, he consoled his mother by saying Guru Nanak Dev Ji taught “What Waheguru does is best”.

During Guru Ji’s short reign, Guru Ji inculcated the spirit of help and assistance in his followers and declared that the followers of Guru Nanak Dev Ji must always be ready to help others irrespective of the recipient’s colour, caste, creed and religion. Guru Ji proved through his missionary work that spiritual attainment and divine wisdom does not depend on age and that it was a gift from God that could be bestowed on anyone. 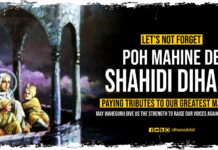