A splendid Divine Light shone in the darkness of the night. Pir Bhikan Shah a Muslim mystic performed his prayers in that direction, and guided by this Divine Light, he travelled with a group of his followers until he reached Patna Sahib in Bihar. It was here that Gobind Rai Ji was born to Mata Gujri in 1666. Pir Bhikan Shah approached the child and offered two bowls of milk, signifying both the great religions of Hinduism and Islam. The child smiled and placed his hands on both bowls. The Pir bowed in utter humility and reverence to the new Prophet of all humanity.

Guru Gobind Singh Ji was born with a holy mission of which he tells us in his autobiography “Bachitar Natak” (Wonderous Drama). In it Guru Ji tells us how and for what purpose he was sent into this world by God. He states that before he came into this world , as a bodiless spirit he was engaged in meditation in the seven peaked Hemkunt mountain. ‘Thy religion will prevail in all the world, when it has Thy support’.”

Guru Ji describes the purpose of his coming to this world and why he emerged from the Supreme Reality in human form to carry out his Creator’s command :

“For this purpose was I born, let all virtuous people understand. I was born to advance righteousness, to emancipate the good, and to destroy all evil-doers root and branch.”

During his childhood Guru Ji received tutoring in various languages and training in martial arts. In 1675 Guru Tegh Bahadur Ji was martyred to uphold the freedom of the Kashmiri Pandits to practice their faith, even though Guru Ji rejected Hindu beliefs. Gobind Rai at the age of 9 years was instated as the tenth Guru King. Guru Ji began to build on the principles of self defence and armed opposition to injustice already laid down by his grandfather Guru Hargobind Ji, and began organising mock battles for training his followers in strategy of war. His devoted Sikhs bought horses and weapons and many other precious gifts.

The neighbouring hill rajas became jealous of Guru Ji’s growing power and popularity and challenged Guru Ji to battle. Pir Buddu Shah came with 700 followers to Guru Ji’s aid in the Battle of Bhangani (1688) which resulted in victory for the Sikhs. Later Guru Ji came to the aid of the hill rajas, who were attacked by Mughul forces to collect annual tax. In the ensuing Battle at Nasaun (1690), Guru Sahib Ji’s army won a resounding victory of the Mughal forces.

Guru Ji was conscious of his mission and decided to find ‘committed followers’ who would stand by him no matter what. Thus in 1699 at Anandpur Sahib, Guru Ji carried out God’s command to create the “Order Of The Khalsa”. Five devoted Sikhs offered total loyalty including readiness to die for Guru Ji, they were initiated by a new ceremony “Amrit” (the Nectar of Immortality) or “Khand-di-Pahul”. Guru Ji then asked the beloved five to initiate him by giving him Amrit, Guru Ji had thus become Guru and disciple. The new Khalsa Panth were to adopt the 5 Ks, Kesh – uncut hair, Kanga – comb, Kirpan – sword, Kachera – shorts and Kara – iron bracelet, also they were prohibited from cutting their hair, committing adultery, eating meat and using intoxicants. Guru Ji proclaimed :

“Whosoever will become my Sikh will not present themselves before me without long hair and weapons.”

Thousands more followed in the foot steps of the “Five Beloved Ones” and drank the Nectar of Immortality. The prejudices of caste, gender, colour or social status where destroyed as anyone worthy and willing to follow the Code of the Khalsa was initiated, thus the Fatherhood of God and brotherhood of all humanity was not only preached but also put into practice:

Guru Ji launched the Khalsa onto a spiritual crusade to fight voluntarily against all types of tyranny and injustice. In this way the last phase of Guru Ji’s life was spent in defensive wars against the hill chiefs and the Mogul forces. For the well being of the whole humanity Guru Ji sacrificed his four sons, his mother and many brave Sikhs. His two younger sons (Sahibzada Zorawar Singh Ji (7) and Sahibzada Fateh Singh Ji (5) were bricked alive at Sirhind, as a result of not bowing down and accepting Islam, Guru Ji’s elder sons Sahibzada Ajit Singh Ji (17) and Sahibzada Jujhar Singh Ji (15) fell fighting a battle at Chamkaur. To the martyrdom of his sons Guru Ji responded:

“So what if I have lost four sons, many more in their thousands live.”

Having accomplished the Mission from God, Guru Ji left his mortal frame in 1708. Before he entered God’s court, Guru Ji proclaimed Sri Guru Granth Sahib Ji (Shabad Guru), the written teachings of the Gurus as the everlasting Guru of the Sikhs.

Guru Ji’s achievements were remarkable for such a short life span:

Guru Ji had brought into full circle and completed the teachings commenced by Guru Nanak Dev Ji, the Guru’s Sikh would now be just like the Guru and be perfect and complete (Gurmukh). The Gurmukh’s love to act in the Name of Truth will continue attracting martyrs in millions in times to come for the universal interest and well being of the whole of mankind.

“O Lord, of Thee this boon I ask,
That I never shun a righteous deed.
Let me be fearless when I go into battle,
Give me faith that victory will be mine.
Let one directive guide my mind,
That I may ever sing Thy praise,
And when comes the time to end my life,
I should die heroically fighting on the Battle field.” 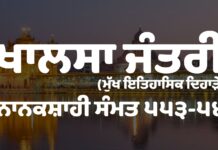