Guru Arjan dev Ji was the youngest of the 3 sons of Guru Ramdas Ji (Prithi Chand and Maha Dev were the other two). We have already seen how Guru Amardas Ji had to wait over 60 years before he found the True Guru (Guru Angad Dev Ji), but Guru Arjan Dev Ji was blessed from the start, Guru Ramdas Ji was his father and Guru Amardas Ji his grandfather.

Guru Ji made several important contributions to the proliferation of Sikhi;

• During his childhood, he helped his father with the excavation of the Amrit-Sarovar (Pool of nectar) at Ramdaspur. He also began construction of a central temple Sri Harimandar Sahib Ji (known as the Golden Temple), he persuaded Sikhs to set up their businesses in this new town which came to be called Amritsar. He also founded several other towns at Tarn Taran Guru Ji established a leprosarium to heal helpless victims. Guru Ji also undertook missionary tours to set-up new congregations and thus consolidated Sikhs even further.

Guru Ji’s other contributions can be remembered by the words Gurbani and Kurbani;

Gurbani is the word of God, Guru Ji incorporated the hymns of the preceding Gurus and a few eminent Saints and Sufis (from Hindu and Islamic faiths) into the Sikh Scriptures: Adi Granth Sahib Ji (known today as Guru Granth Sahib Ji). The hymns are organised into musical measures using Raags. The Sikhs revere Guru Granth Sahib Ji because it contains the revelation of the Gurus and their teachings, it gives complete spiritual guidance and divine wisdom. Guru Arjan Dev Ji himself had so much respect, that he gave his own resting place to Adi Granth Sahib Ji and himself slept on the floor.

This was a prophecy earlier predicted; when Guru Arjan Dev Ji was a baby, he crawled to his grandfather and touched the food, instead of telling him off, Guru Amardas Ji blessed him with “Dotha Bani da Botha” meaning my grandson (Dotha) will be the ship (Botha) that carries God’s word (Bani). Guru Arjan Dev Ji has written nearly half the hymns in Guru Granth Sahib Ji and emphasises Nam-simran (remembrance of God) throughout his hymns and a yearning to meet God.

Kurbani means sacrifice, Guru Ji had already sacrificed his all to service of the Sikh people and enjoyed good relations with the Emperor Akbar. However on Akbar’s death his son Jahangir who was a fundamentalist and a fanatic, desired to suppress Sikhi which was growing strongly. Jahangir expressed his hostility to Guru Arjan Dev Ji in his autobiography, he wrote :

‘For a long time, it had been in my mind to put a stop to this vain affair (Sikh faith) and to bring him (Guru Arjan Dev Ji) into the fold of Islam.’

Jahangir found an excuse when people alleged that the Sikh Scriptures Adi Granth Sahib Ji contained words derogatory to Islam, already prejudiced Jahangir called for no proof and imposed fine. Guru Ji refused to pay an unjust fine. Jahangir had also heard incorrectly of Guru Ji blessing Jahangir’s rebel son Prince Khusro, and again with out asking for evidence he writes in his autobiography that Guru Arjan Dev Ji should be captured and his property confiscated and Guru Ji should be put to death by torture.

Guru Arjan Dev Ji was taken to Lahore where he was tortured by pouring burning sand and boiling water over his body while sitting on a hot iron plate. Guru Ji sacrificed his life to uphold the Sovereignty of the Sikh Scriptures and to resist injustice. For this reason Guru Ji is also known as the King of Martyrs. 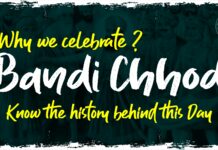